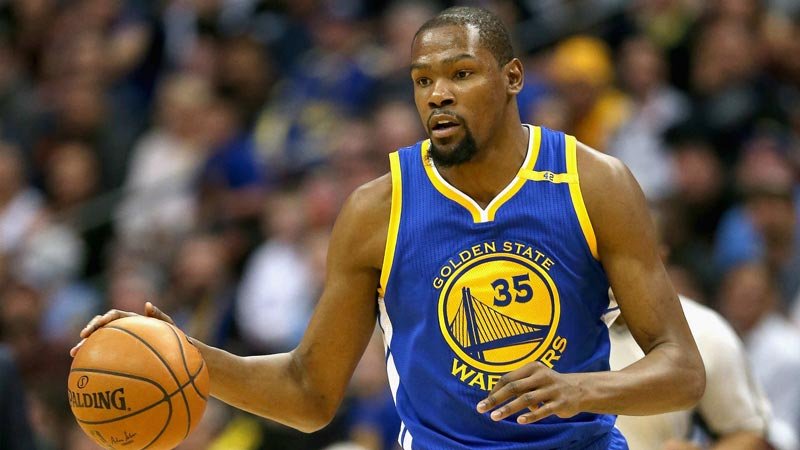 Looking for the best Kevin Durant Durant quotes to motivate yourself? Then look no further.

Kevin Durant is a is an American professional basketball player for the Golden State Warriors of the NBA.

Thanks to endorsement deals with the likes of Foot Locker and Nike, Durant is one of the highest-earning basketball players in the world. He also has other talents which include writing, photography and has even ventured into acting.

I’ve put together the best Kevin Durant quotes that will inspire and motivate you to work hard and follow your dreams.

4. “I know that hard work got me here. And the day I stop working hard, this can all go away.” – Kevin Durant

5. “My mother taught me to always be strong and always work hard. She’s been working hard her whole life for me and my brother. I’m a lot like her in that I work hard for what I want. She taught me that.” – Kevin Durant

6. “If I come to work every day and do my job, work as hard as I can, be a great teammate, the rest of that stuff will take care of itself.” – Kevin Durant

7. “Set the goal and work all day for it, until you achieve, I want to be a champion, the best!” – Kevin Durant

8. “Every memory I had growing up was involving a basketball. I didn’t go to the prom and stuff like that. It was always basketball for me.” – Kevin Durant

9. “So many people doubted me. They motivated me every single day to be who I am.” – Kevin Durant

11. “It’s hard to find intelligence, character and unselfishness all at the same time. That’s rare in any profession, but it’s what makes a champion.” – Kevin Durant

12. “I’m just trying to grow. That’s one thing I told myself is, ‘Don’t worry about who people say is the best player.'” – Kevin Durant

13. “I’m a basketball player. That’s what I do and what I love but that’s just not all who I am. I’m talented in a lot of different areas.” – Kevin Durant

14. “I’m busy working on every aspect of game – defense, shooting, rebounding – but I really want to become a better overall team player. Help my teammates become better players out on the court in order to win more ball games.” – Kevin Durant

15. “When people are used to doing something, they want you to stay in that lane.” – Kevin Durant

16. “I just want to grow spiritually with God. I’m keeping strong at it, just trying to make my walk with faith a little better.” – Kevin Durant

17. “The clothes are not making me, if I like it, that’s all that matters. It’s not about the clothes. It’s about how I am as a person and how confident I am.” – Kevin Durant

18. “Basketball is a platform for me to inspire people.” – Kevin Durant

19. “I’ve learned what it feels like to lose, believe me. But I think in the end, that is just going to make winning that much better.” – Kevin Durant

21. “When you got people behind you, you can do whatever.” – Kevin Durant

22. “Everything in my life, I had to take it. They are not going to give it to you out of sympathy. I wouldn’t want it any other way.” – Kevin Durant

23. “It’s fun that I get to live out my dream every single day. It’s a blessing. I can’t lose sight of that and I’ve just got to keep pushing.” – Kevin Durant

25. “We live in a world of what have you done for me lately. We don’t remember the day before sometimes. Think back five, six, years ago what he was doing. It’s unheard of.” – Kevin Durant

28. “I fell so many times and got back up. I been through the toughest times with my family, but…I’m still standing.” – Kevin Durant

29. “The off-season is where you put in the most work. You prepare at this time of the year so that you can be ready to win a championship.” – Kevin Durant

32. “Trial and error is only going to make you a better player.” – Kevin Durant

33. “Winning is all about the journey. The journey is better than the destination.” – Kevin Durant

34. “It’s about competition. When you play against the best, it brings the best out of you as well.” – Kevin Durant

35. “I was always in the gym. People would look at me crazy because I spent so much time there. But that’s what it was about. I’m glad I did it.” – Kevin Durant

37. “I want to be one of the greatest players of all time. I want to be remembered.” – Kevin Durant

39. “Experience is the best teacher. I’ve been through a lot – going to the Olympics, going to the Finals, having a lot of good games and having a lot of bad games. It’s a roller-coaster ride and I’m just happy I’m a part of it. If it was easy, then everybody could do it.” – Kevin Durant

42. “Don’t let success go to your head. Don’t let disappointment get to your heart.” – Kevin Durant

43. “(Dear Mom,) We were’t supposed to be here. You made us believe, you kept us off the street, put clothes on our backs, food on the table. When you didn’t eat, you made sure we ate. You went to sleep hungry. You sacrificed for us. You’re the real MVP.” – Kevin Durant

What are your favourite Kevin Durant quotes? Let me know in the comments and please share this post to help and inspire others.

Related Topics:athletesbasketballKevin Durant
Up Next