Its hard to imagine a childhood today without the magic of Disney and its all thanks to one visionary man, Walt Disney.

Walt Disney was a man with a crystal clear vision and a strong conviction that he could make it a reality.

Some people thought he was crazy in the pursuit of his dreams and he was even rejected 300 times by bankers who thought that idea of Micky Mouse was absurd.

Today the Walt Disney Company is global media empire and one of the most valuable companies in the world.

Below you’ll find 49 of the most inspirational Walt Disney quotes that will inspire your success and make you believe in your dreams again.

1. “All our dreams can come true if we have the courage to pursue them.” – Walt Disney

2. “I always like to look on the optimistic side of life, but I am realistic enough to know that life is a complex matter.” – Walt Disney

3. “The difference in winning and losing is most often, not quitting.” – Walt Disney

5. “Do what you do so well that people can’t help telling others about you.” – Walt Disney

6. “The way to get started is to quit talking and begin doing.” – Walt Disney

8. “The way to get started is to quit talking and begin doing.” – Walt Disney

9. “Times and conditions change so rapidly that we must keep our aim constantly focused on the future.” – Walt Disney

10. “When you’re curious, you find lots of interesting things to do.” – Walt Disney

13. “We are not trying to entertain the critics. I’ll take my chances with the public.” – Walt Disney

14. “The more you like yourself, the less you are like anyone else, which makes you unique.” – Walt Disney

15. “When you believe in a thing, believe in it all the way, implicitly and unquestionable.” – Walt Disney

16. “A man should never neglect his family for business.” – Walt Disney

17. “There is more treasure in books than in all the pirate’s loot on Treasure Island.” – Walt Disney

18. “Disneyland is a work of love. We didn’t go into Disneyland just with the idea of making money.” – Walt Disney

19. “Of all the things I’ve done, the most vital is coordinating those who work with me and aiming their efforts at a certain goal.” – Walt Disney

20. “That’s the real trouble with the world. Too many people grow up.” – Walt Disney

21. “Why worry? If you’ve done the very best you can, then worrying won’t make it any better.” – Walt Disney

22. “Laughter is timeless, imagination has no age, dreams are forever.” – Walt Disney 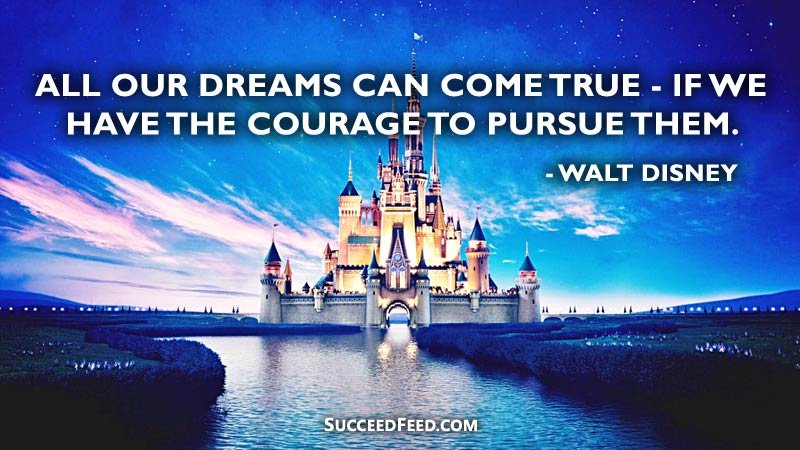 25. “Leadership means that a group, large or small, is willing to entrust authority to a person who has shown judgement, wisdom, personal appeal, and proven competence.” – Walt Disney

26. “Do a good job. You don’t have to worry about the money; it will take care of itself. Just do your best work — then try to trump it.” – Walt Disney

27. “A person should set his goals as early as he can and devote all his energy and talent to getting there. With enough effort, he may achieve it. Or he may find something that is even more rewarding. But in the end, no matter what the outcome, he will know he has been alive.” – Walt Disney

28. “All you’ve got to do is own up to your ignorance honestly, and you’ll find people who are eager to fill your head with information.” – Walt Disney

29. “Everyone falls down. Getting back up is how you learn how to walk.” – Walt Disney

30. “Never get bored or cynical. Yesterday is a thing of the past.” – Walt Disney

31. “Courage is the main quality of leadership, in my opinion, no matter where it is exercised. Usually it implies some risk — especially in new undertakings. Courage to initiate something and to keep it going, pioneering and adventurous spirit to blaze new ways, often, in our land of opportunity.” – Walt Disney

32. “People often ask me if I know the secret of success and if I could tell others how to make their dreams come true. My answer is, you do it by working.” – Walt Disney

33. “It’s a mistake not to give people a chance to learn to depend on themselves while they are young.” – Walt Disney

34. “I have never been interested in personal gain or profit. This business and this studio have been my entire life.” – Walt Disney

38. “I dream, I test my dreams against my beliefs, I dare to take risks, and I execute my vision to make those dreams come true.” – Walt Disney

39. “The more you are in a state of gratitude, the more you will be attract things to be grateful for.” – Walt Disney

41. “I suppose my formula might be: dream, diversify and never miss an angle.” – Walt Disney

43. “Faith I have, in myself, in humanity, in the worthlessness of the pursuits in entertainment for the masses. But wide awake, not blind faith, moves me.” – Walt Disney

44. “All the adversity I’ve had in my life, all my troubles and obstacles, have strengthened me. You may not realize it when it happens, but a kick in the teeth may be the best thing in the world for you.” – Walt Disney

45. “I can never stand still. I must explore and experiment. I am never satisfied with my work. I resent the limitations of my own imagination.” – Walt Disney

46. “Dreams, ideas, and plans not only are an escape, they give me purpose, a reason to hang on.” – Walt Disney

47. “Happiness is a state of mind. it’s just according to the way you look at things.” – Walt Disney

48. “The greatest moments in life are not concerned with selfish achievements but rather with the things we do for the people we love and esteem.” – Walt Disney

49. “It is good to have a failure while you’re young because it teaches you so much, and once you’ve lived through the worst, you’re never quite as vulnerable afterwards.” – Walt Disney

Did you find these Walt Disney Quotes inspiring?

Related Topics:DisneyinspirationmotivationquotesvisionaryWalt Disney
Up Next

77 Napoleon Hill Quotes That Will Make You Rich

67 Tai Lopez Quotes That Will Help You Succeed