Napoleon Hill is best known for his book Think And Grow Rich, which is one of the top 10 best selling self-help books of all time.

More than just a book on becoming rich, Think And Grow Rich offered principles for attaining success in endeavour, which Napoleon Hill gathered from studying and interviewing 500 successful highly success people at the time.

Even though the book was first published in 1937, its success principles stand the test of time and are all applicable today, and will be forever in the future because it was heavily focused on developing the mindset required for success.

Here you’ll find the best Think And Grow Rich quotes and Napoleon Hill quotes from his other work.

They are profound wisdom and guiding principles for anyone looking to become rich and attain abundance in any area of life.

2. “There is but one dependable method of accumulating and legally holding riches, and that is by rendering useful service.” – Napoleon Hill

4. “If you don’t know what you want, don’t say you never had a chance.” – Napoleon Hill

5. “One of the most common causes of failure is the habit of quitting when one is overtaken by temporary defeat!” – Napoleon Hill

6. “Whatever the mind of man can conceive and believe, it can achieve. Thoughts are things! And powerful things at that, when mixed with definiteness of purpose, and burning desire, can be translated into riches.” – Napoleon Hill

7. “Until you have formed the habit of looking for the good instead of the bad there is in others, you will be neither successful nor happy.” – Napoleon Hill

8. “You might well remember that nothing can bring you success but yourself.” – Napoleon Hill

9. “Create a definite plan for carrying out your desire and begin at once, whether you ready or not, to put this plan into action.” – Napoleon Hill

10. “Every person who wins in any undertaking must be willing to cut all sources of retreat. Only by doing so can one be sure of maintaining that state of mind known as a burning desire to win – essential to success.” – Napoleon Hill

11. “All the breaks you need in life wait within your imagination, Imagination is the workshop of your mind, capable of turning mind energy into accomplishment and wealth.” – Napoleon Hill

12. “Edison failed 10,000 times before he made the electric light. Do not be discouraged if you fail a few times.” – Napoleon Hill

13. “The best way to sell yourself to others is first to sell the others to yourself.” – Napoleon Hill

14. “No man ever achieved worth-while success who did not, at one time or other, find himself with at least one foot hanging well over the brink of failure.” – Napoleon Hill

15. “There is no such thing as something for nothing.” – Napoleon Hill

16. “Cherish your visions and your dreams as they are the children of your soul, the blueprints of your ultimate achievements.” – Napoleon Hill

18. “Reduce your plan to writing. The moment you complete this, you will have definitely given concrete form to the intangible desire.” – Napoleon Hill

19. “No accurate thinker will judge another person by that which the other person’s enemies say about him.” – Napoleon Hill

20. “It has always been my belief that a man should do his best, regardless of how much he receives for his services, or the number of people he may be serving or the class of people served.” – Napoleon Hill

21. “Success comes to those who become success conscious.” – Napoleon Hill

22. “There are no limitations to the mind except those we acknowledge, both poverty and riches are the offspring of thought.” – Napoleon Hill 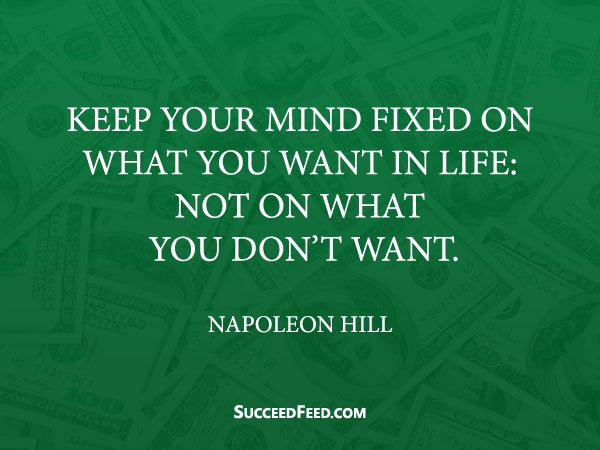 24. “The starting point of all achievement is desire. Keep this constantly in mind. Weak desires bring weak results, just as a small fire makes a small amount of heat.” – Napoleon Hill

25. “Great achievement is usually born of great sacrifice, and never the result of selfishness.” – Napoleon Hill

26. “Everyone faces defeat. It may be a stepping-stone or a stumbling block, depending on the mental attitude with which it is faced.” – Napoleon Hill

27. “It is literally true that you can succeed best and quickest by helping others succeed.” – Napoleon Hill

28. “A positive mind finds a way it can be done; A negative mind looks for all the ways it can’t be done.” – Napoleon Hill

29. “Don’t wait. The time will never be just right. Start where you stand, and work whatever tools you may have at your command and better tools will be found as you go along.” – Napoleon Hill

30. “Our only limitations are those we set up in our minds.” – Napoleon Hill

31. “The cause of depression is traceable directly to the worldwide habit of trying to reap without sowing.” – Napoleon Hill

33. “Some people dream of success, while others wake up and work hard at it.” – Napoleon Hill

34. “If you give up before your goal is reached you’re a quitter. A quitter never wins and a winner never quits.” – Napoleon Hill

35. “There is one quality which one must possess to win, and that is definiteness of purpose, the knowledge of what one wants, and a burning desire to possess it.” – Napoleon Hill

37. “You can think your way into or out of almost any circumstance, good or bad.” – Napoleon Hill

38. “No one is ready for a thing until he believes he can acquire it.” – Napoleon Hill

39. “Keep your mind fixed on what you want in life: not on what you don’t want.” – Napoleon Hill

40. “Hold a picture of yourself and steadily enough in your mind’s eye, and you will be drawn toward it.” – Napoleon Hill

42. “All thoughts which have been emotionalized (given feeling) and mixed with faith (expectancy), begin immediately to translate themselves into their physical equivalent.” – Napoleon Hill

43. “To be a star, you must shine your own light, follow your own path, and don’t worry about darkness, for that is when the stars shine brightest.” – Napoleon Hill

45. “Whatever it is that you lack in education, or knowledge, or influence, you can always obtain it through somebody who has it. Exchange of favours and exchange of knowledge is one of the greatest exchanges in the world.” – Napoleon Hill 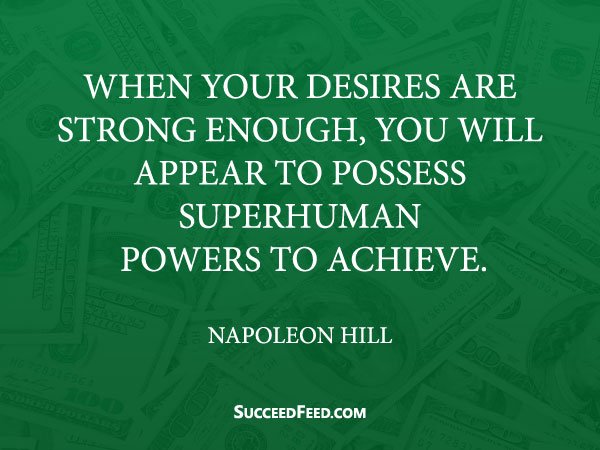 47. “If you want to do something, work yourself into a state of wild enthusiasm and go to work where you stand, even if it’s nothing more than drawing a picture in your mind of the thing you want to do, and keep drawing that picture, making it more vivid all the time.” – Napoleon Hill

48. “Set aside a definite amount for investment, even if it’s only as small as a dollar a week or even 50 cents a week. It’s not the amount that’s important, it’s the habit of being resourceful and frugal.” – Napoleon Hill

50. “When your desires are strong enough, you will appear to possess superhuman powers to achieve.” – Napoleon Hill

51. “Every adversity, every failure, every heartache carries with it the seed of an equal or greater benefit.” – Napoleon Hill

53. “Happiness is found in doing, not merely possessing.” – Napoleon Hill

54. “A genius is simply one who has taken full possession of his own mind and directed it toward objectives of his own choosing, without permitting outside influences to discourage or mislead him.” – Napoleon Hill

55. “Remember that your dominating thoughts attract, through a definite law of nature, by the shortest and most convenient route, their physical counterpart. Be careful what your thoughts dwell upon.” – Napoleon Hill

56. “Successful men become successful only because they acquire the habit of thinking in terms of success.” – Napoleon Hill

57. “Every failure brings with it the seed of an equivalent success.” – Napoleon Hill

58. “Anything you do to and for another person, you do it to and for yourself.” – Napoleon Hill

60. “You will resemble, tomorrow, the dominating thoughts that you keep alive in your mind today!” – Napoleon Hill

61. “The reason man may become the master of his own destiny is because he has the power to influence his own subconscious mind.” – Napoleon Hill

62. “No one is ready for a think until he believes he can acquire it. The state of mind must be belief, not mere hope or wish. Open-mindedness is essential for belief. Closed minds do not inspire faith, courage and belief.” – Napoleon Hill

63. “There is one weakness in people for which there is no remedy. It is the universal weakness of lack of ambition.” – Napoleon Hill

65. “Life reflects your own thoughts back to you.” – Napoleon Hill

66. “Opinions are the cheapest commodities on earth. Everyone has a flock of opinions ready to be wished upon anyone who will accept them. If you are influenced by “opinions” when you reach decisions, you will not succeed in any undertaking.” – Napoleon Hill

67. “There is no substitute for persistence. The person who makes persistence his watch-word, discovers that “Old Man Failure” finally becomes tired, and makes his departure. Failure cannot cope with persistence.” – Napoleon Hill

68. “Knowledge is power. It is nothing of the sort! Knowledge is only potential power. It becomes power only when, and if, it is organised into definite plans of action, and directed to a definite end.” – Napoleon Hill

70. “Fear, the worst of all enemies, can be effectively cured by forced repetition of acts of courage.” – Napoleon Hill

71. “Education comes from within; you get it by struggle and effort and thought.” – Napoleon Hill

72. “Desire is the starting point of all achievement, not a hope, not a wish, but a keen pulsating desire which transcends everything.” – Napoleon Hill

73. “If you do not conquer self, you will be conquered by self.” – Napoleon Hill

74. “Deliberately seek the company of people who influence you to think and act on building the life you desire.” – Napoleon Hill

75. “You have a brain and mind of your own. Use it, and reach your own decisions.” – Napoleon Hill

76. “Action is the real measure of intelligence.” – Napoleon Hill

77. “Whatever the mind of man can conceive and believe, it can achieve.”  – Napoleon Hill 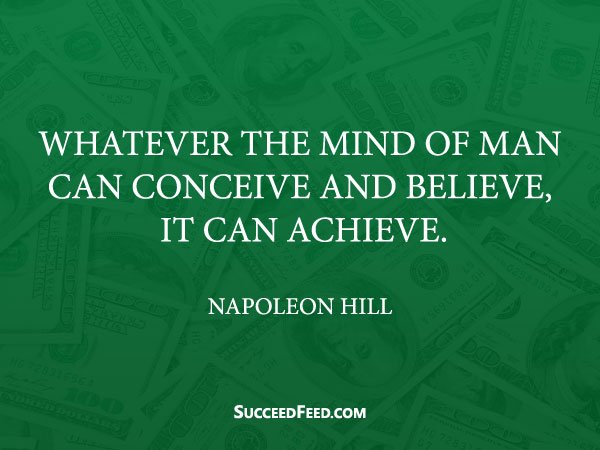 Did you find these Napoleon Hill Quotes inspiring?

49 Walt Disney Quotes That Will Inspire You To Success