When you’re writing about the greatest of all time there really isn’t any need for a long introduction.

Muhammad Ali was not only considered the greatest heavyweight boxer of all time but also the greatest sportsman, an entertainer, an activist, an icon, a legend…simply the greatest.

Although passing in June 2016, at the age of 74, his memories, his popular quotes, rhymes and sayings will always live on.

Although tough in the ring, it was Muhammad Ali’s mental toughness which really set him apart and made him the greatest. Below I’ve compiled 63 Muhammad Ali Quotes that will inspire you to greatness too.

2. “To be a great champion you must believe you are the best. If you’re not, pretend you are.” – Muhammad Ali

4. “Service to others is the rent you pay for your room here on earth.” – Muhammad Ali

5. “If my mind can conceive it, and my heart can believe it then I can achieve it.” – Muhammad Ali

7. “It isn’t the mountains ahead to climb that wear you out; it’s the pebble in your shoe.” – Muhammad Ali

8. “If you even dream of beating me you’d better wake up and apologize.” – Muhammad Ali

9. “Braggin’ is when a person says something and can’t do it. I do what I say.” – Muhammad Ali

10. “Only a man who knows what it is like to be defeated can reach down to the bottom of his soul and come up with the extra ounce of power it takes to win when the match is even.” – Muhammad Ali

11. “I should be a postage stamp. That’s the only way I’ll ever get licked.” – Muhammad Ali

13. “He who is not courageous enough to take risks will accomplish nothing in life.” – Muhammad Ali

15. “I hated every minute of training, but I said, ‘Don’t quit. Suffer now and live the rest of your life as a champion.'” – Muhammad Ali

17. “Hating people because of their color is wrong. And it doesn’t matter which color does the hating. It’s just plain wrong.” – Muhammad Ali

19. “Live everyday as if it were your last because someday you’re going to be right.” – Muhammad Ali

21. “The fight is won or lost far away from witnesses – behind the lines, in the gym, and out there on the road, long before I dance under those lights.” – Muhammad Ali

23. “I am an ordinary man who worked hard to develop the talent I was given. I believed in myself, and I believe in the goodness of others.” – Muhammad Ali

24. “Life is a gamble. You can get hurt, but people die in plane crashes, lose their arms and legs in car accidents; people die every day. Same with fighters: some die, some get hurt, some go on. You just don’t let yourself believe it will happen to you.” – Muhammad Ali

25. “I figured that if I said it enough, I would convince the world that I really was the greatest.” – Muhammad Ali

26. “It’s lack of faith that makes people afraid of meeting challenges, and I believed in myself.” – Muhammad Ali

27. “Silence is golden when you can’t think of a good answer.” – Muhammad Ali

29. “Age is whatever you think it is. You are as old as you think you are.” – Muhammad Ali

30. “People don’t realize what they had till it’s gone. Like President Kennedy, there was no one like him, the Beatles, and my man Elvis Presley. I was the Elvis of boxing.” – Muhammad Ali

31. “It’s the repetition of affirmations that leads to belief. And once that belief becomes a deep conviction, things begin to happen.” – Muhammad Ali 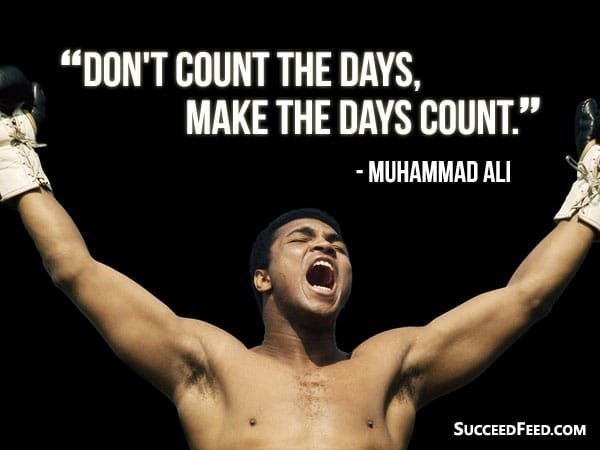 32. “My principles are more important than the money or my title.” – Muhammad Ali

33. “To be able to give away riches is mandatory if you wish to possess them. This is the only way that you will be truly rich.” – Muhammad Ali

34. “I don’t count the sit-ups. I only start counting when it starts hurting because they’re the only ones that count. That’s what makes you a champion.” – Muhammad Ali

35. “Life is short; we get old so fast. It doesn’t make sense to waste time on hating.” – Muhammad Ali

36. “Success is not achieved by winning all the time. Real success comes when we rise after we fall. Some mountains are higher than others. Some roads steeper than the next. There are hardships and setbacks but you cannot let them stop you. Even on the steepest road you must not turn back.” – Muhammad Ali

38. “Even the greatest was once a beginner. Don’t be afraid to take that first step.” – Muhammad Ali

39. “Champions aren’t made in the gyms. Champions are made from something they have deep inside them-a desire, a dream, a vision.” – Muhammad Ali

41. “You lose nothing when fighting for a cause … In my mind the losers are those who don’t have a cause they care about.” – Muhammad Ali

43. “You’re not going to enjoy every minute of the journey, but the success you’ll find at the end will make it all worth it.” – Muhammad Ali

44. “Champions have to have the skill and the will. But the will must be stronger than the skill.” – Muhammad Ali

45. “There comes a time in every person’s life when he has to choose the course his life will take.” – Muhammad Ali

46. “Whatever the challenge was, however unattainable the goal may have seemed, I never let anyone talk me out of believing in myself.” – Muhammad Ali

47. “Rest but never quit. Even the sun has a sinking spell each evening. But it always rises the next morning. At sunrise, every soul is born again.” – Muhammad Ali

48. “True success is reaching our potential without compromising our values.” – Muhammad Ali

49. “There are billions of people in the world, and every one of them is special. No one else in the world is like you.” – Muhammad Ali

50. “Champions come and go, but to be legendary you got to have heart, more heart than the next man, more than anyone in the world.” – Muhammad Ali

51. “The only limitations one has, are the ones they place on themselves.” – Muhammad Ali

52. “God will not place a burden on a man’s shoulders knowing that he cannot carry it.” – Muhammad Ali

55. “I am grateful for all my victories, but I am especially grateful for my losses, because they only made me work harder.” – Muhammad Ali

57. “Success is not achieved by winning all the time. Real success comes when we rise after we fall.” – Muhammad Ali

58. “Wouldn’t it be a beautiful world if just 10 percent of the people who believe in the power of love would compete with one another to see who could do the most good for the most people?” – Muhammad Ali

59. “The greatest victory in life is to rise above the material things that we once valued most.” – Muhammad Ali

61. “Some people have special resources inside, and when God blesses you to have more than others, you have a responsibility to use it right.” – Muhammad Ali

62. “People will know you’re serious when you produce.” – Muhammad Ali

Did you find these Muhammad Ali Quotes inspiring?

Related Topics:athletesMuhammad Aliquotes
Up Next

77 Napoleon Hill Quotes That Will Make You Rich