Jordan Belfort aka The Wolf Of Wall Street is a bestselling author and motivational speaker.

In the 1990’s Jordan started Stratton Oakmont and at it’s height went on to make $50M in one year.  As the owner of Stratton Oakmont, Belfort employed over 1,000 stockbrokers and raised over $1.5 billion and started more than 30 million-dollar-companies from scratch.

What I find most inspiring about Jordan is that despite the fact that he succumbed to the traps of the high flying Wall Street lifestyle and experienced a very public fall from grace, he had the strength of character to learn from his mistakes and turn his life around.

Today he is best know for his bestselling book, The Wolf Of Wall Street. It was also made into a movie where Jordan is played by Leonardo Dicaprio.

Below I’ve put together 33 of the best Jordan Belfort Quotes on success that will motivate you.

Jordan has a lot of experience you can learn from so please do go through the quotes and start applying his wisdom into your life.

1. “If you want to be rich, never give up. People tend to give up. If you have persistence, you will come out ahead of most people. More importantly, you will learn. When you do something, you might fail. But that’s not because you’re a failure. It’s because you have not learnt enough. Do it differently each time. One day, you will do it right. Failure is your friend.” – Jordan Belfort

3. “I want you to deal with your problems by becoming rich.” – Jordan Belfort

4. “The only thing standing between you and your goal is the bullshit story you keep telling yourself as to why you can’t achieve it.” – Jordan Belfort

5. “The easiest way to make money is – create something of such value that everybody wants and go out and give and create value, the money comes automatically.” – Jordan Belfort

6. “When you live your life by poor standards, you inflict damage on everyone who crosses your path, especially those you love.” – Jordan Belfort

7. “Successful people are 100% convinced that they are masters of their own destiny , they’re not creatures of circumstance, they create circumstance, if the circumstances around them suck they change them.” – Jordan Belfort

10. “If you give people a good enough ‘why’, they will always figure out the ‘how’.” – Jordan Belfort

11. “Without action, the best intentions in the world are nothing more than that: intentions.” – Jordan Belfort

15. “Create a vision that makes you wanna jump out of bed in the morning.” – Jordan Belfort 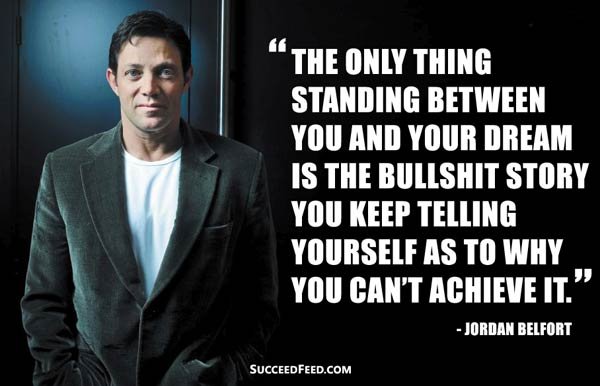 16. “Playing it safe and taking no risks is a shortcut to poverty.” – Jordan Belfort

17. “If money isn’t everything work at McDonald’s.” – Jordan Belfort

19. “You grow stronger from failure than you do from success.” – Jordan Belfort

20. “Everything that has happened to you up to this point is irrelevant. It’s your past.” – Jordan Belfort

23. “If you try and fail, people will praise you for trying. If you fail to even try people will ignore you.” – Jordan Belfort

24. “The story that you tell yourself is exactly what holds you back from being successful.” – Jordan Belfort

25. “I’m constantly asking myself questions. And the problem with that is that your brain is like a computer: If you ask a question, it’s programmed to respond, whether there’s an answer or not. I’m constantly weighing everything in my mind and trying to predict how my actions will influence events.” – Jordan Belfort

26. “Best way to sell something: don’t sell anything. Earn awareness, respect and trust of those who might buy.” – Jordan Belfort

28. “Dream stompers are people who want to stomp on your hopes and dreams. Lose their phone numbers.” – Jordan Belfort

31. “There’s only 1 way to get rich, quick! But not through a get rich quick scheme. There’s a difference.” – Jordan Belfort

32. “Some people say that it’s so hard with the Internet, but I know for a fact that the Internet has made it easier for someone to establish themselves. There’s so much you can do online. If you know how to use it right, the web serves as the great equalizer for someone that’s just getting into business.” – Jordan Belfort

33. “There’s no way to succeed in business without the highest ethical standards.” – Jordan Belfort 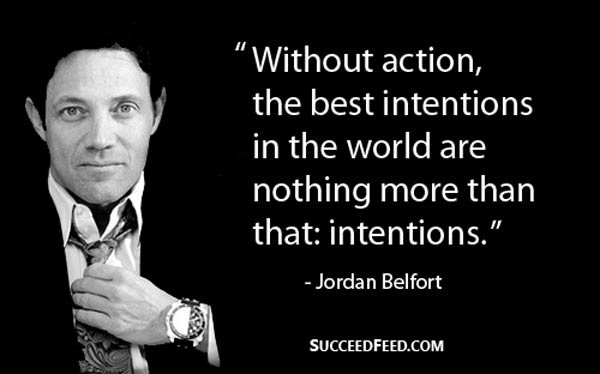 Did you find these Jordan Belfort quotes helpful?

47 Daymond John Quotes To Be Successful