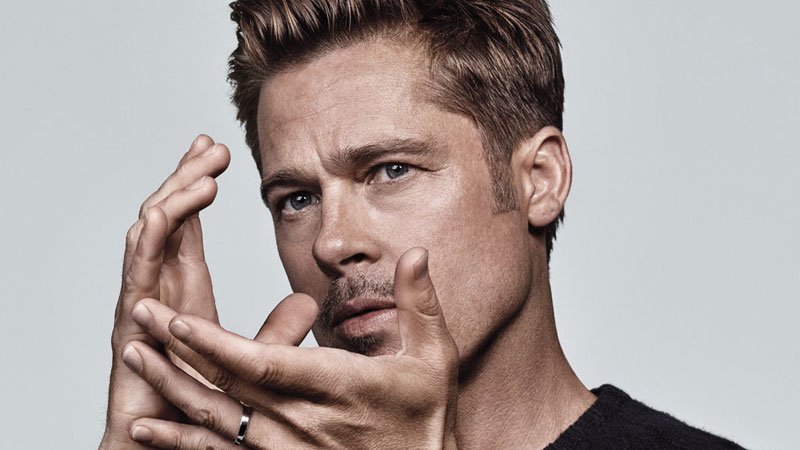 Looking for the best Brad Pitt quotes? Then look no further!

Brad Pitt is one of the most powerful and and influential figures in the entertainment industry. Coming from humble origins, growing up in Oklahoma, the Hollywood legend made a name for himself for films such as Fight Club, The Curious Case of Benjamin Button, Moneyball and 12 Years a Slave.

He produced The Departed and 12 Years a Slave, both of which won the Academy Award for Best Picture. In fact he has been nominated for dozens of highly prestigious awards, and has won an Oscar, a Golden Globe, a Primetime Emmy, a BAFTA award, a Saturn Award, an EDA award… the list goes on.

For a number of years, he was cited as the world’s most attractive man by various media outlets, and his personal life has been the subject of wide publicity, including his lengthy and high-profile relationships with Jennifer Aniston and Angelina Jolie.

Brad Pitt is one of the highest paid actors in the world and has an estimated net worth of $240 million as of 2018.

1. “I think happiness is overrated. Satisfied, at peace-those would be more realistic goals.” – Brad Pitt

3. “I start asking a lot of questions about my own life, and it’s not necessarily fun, but it’s a good exercise.” – Brad Pitt

4. “Actions speak louder than words, and it’s no more true than with your kids.” – Brad Pitt

5. “Success is a beast. And it actually puts the emphasis on the wrong thing. You get away with more instead of looking within.” – Brad Pitt

7. “You can’t be different for different’s sake, and this doesn’t always work, but you have to separate yourself from the normal read. Of course, it has to be truthful. If it’s not truthful, don’t waste your time.” – Brad Pitt

8. “I’m one of those people you hate because of genetics. It’s the truth.” – Brad Pitt

10. “I tell young guys, don’t make choices because somebody else is telling you it’s good from a career maintenance perspective.” – Brad Pitt

11. “Just the fact that there is an unknown (in regards to death) and something greater, can bring a feeling of peace. That’s enough for me.” – Brad Pitt

12. “You must lose everything in order to gain anything.” – Brad Pitt

13. “When you see a person, do you just concentrate on their looks? It’s just a first impression. Then there’s someone who doesn’t catch your eye immediately, but you talk to them and they become the most beautiful thing in the world. The greatest actors aren’t what you would call beautiful sex symbols.” – Brad Pitt

15. “I believe you make your day. You make your life. So much of it is all perception, and this is the form that I built for myself. I have to accept it and work within those compounds, and it’s up to me.” – Brad Pitt

17. “I find all of my performances come down to mathematics in a sense – how do you approach the problem of this character? Sometimes I crack that problem, sometimes I don’t.” – Brad Pitt

18. “It’s those difficult times that inform the next wonderful time, and it’s a series of trade-offs, of events, of wins and losses.” – Brad Pitt

19. “I had a friend who worked at a hospice, and he said people in their final moments don’t discuss their successes, awards or what books they wrote or what they accomplished. They only talk about their loves and their regrets, and I think that’s very telling.” – Brad Pitt

20. “What’s valuable to me has become clearer as I’ve got older. To me, it’s about the value of your time and your day and the value of the people you spend it with.” – Brad Pitt

22. “I’ve always been at war with myself, for right or wrong. I’ve grown quite comfortable with being at war.” – Brad Pitt

23. “I have a hard time with morals. All I know is what feels right, what’s more important to me is being honest about who you are. Morals I get a little hung up on.” – Brad Pitt

24. “I get enraged when people start telling other people how to live their lives.” – Brad Pitt

25. “The latitude and longitudinal lines of where you are born determine your opportunity in life, and it’s not equal. We may have been created equal, but we’re not born equal. It’s a lot to do with luck and you have to pass that on.” – Brad Pitt

27. “Seeing the world is the best education you can get. You see sorrow, and you also see great spirit and will to survive.” – Brad Pitt

28. “I have very few friends. I have a handful of close friends, and I have my family, and I haven’t known life to be any happier.” – Brad Pitt

29. “I’m actually very snobbish about directors. I have to say no all the time. No is the most powerful word in our business. You’ve got to protect yourself.” – Brad Pitt

31. “It’s a violent world we live in. I don’t agree with trying to hide that or cover it up.”- Brad Pitt

32. “We’re so complex; we’re mysteries to ourselves; we’re difficult to eachother. And then storytelling reminds us that we’re all the same.” – Brad Pitt

33. “I am obsessively bent on quality – to an unhealthy degree.” – Brad Pitt

34. “There are no hallmark cards that define the next chapter, or value of a history together.” – Brad Pitt

35. “You don’t know someone until you know what they want.” – Brad Pitt

36. “You don’t really get to choose who you fall in love with. Love chooses you.” – Brad Pitt

37. “You make yourself what you are. You have control of your own destiny.” – Brad Pitt

38. “Personally I like ageing. With age comes wisdom and I have said it before and I say it again, I will take wisdom over youth any day.” – Brad Pitt

40. “I’m not a big proponent of happiness. I think it’s highly overrated. I think misery is underrated. There’s so much value in that. You can’t have one without the other.” – Brad Pitt

41. “There’s peace in understanding that I have only one life, here and now, and I’m responsible.” – Brad Pitt

43. “Get into something that’s really personal that means something to you, where you have something to say and is something really individualized. I wish I was more aware of that when I started my career instead of doing a few things I was told would be good for me. And they weren’t, because it left me empty, so I didn’t do a good job anyways. I think that’s what’s key to what we do: It’s got to be personal.” – Brad Pitt

44. “Do you know how you tell real love? It’s when someone else’s interest trumps your own.” – Brad Pitt

46. “You shouldn’t speak until you know what you’re talking about. That’s why I get uncomfortable with interviews. Reporters ask me what I feel China should do about Tibet. Who cares what I think China should do? I’m a f***ing actor! They hand me a script. I act. I’m here for entertainment, basically, when you whittle everything away. I’m a grown man who puts on makeup.” – Brad Pitt

47. “I’ve always believed happiness is overrated, you know? It’s those difficult times that inform the next wonderful time, and it’s a series of trade-offs, of events, of wins and losses.” – Brad Pitt

48. “The woman is the reflection of her man. If you love her to the point of madness, she will become it.” – Brad Pitt

50. “Fatherhood is the best thing I ever did. It changes your perspective. You can write a book, you can make a movie, you can paint a painting, but having kids is really the most extraordinary thing I have taken on.” – Brad Pitt

52. “This idea of perpetual happiness is crazy and overrated, because those dark moments fuel you for the next bright moments; each one helps you appreciate the other.” – Brad Pitt

54. “I embrace the messiness of life. I find it so beautiful actually.” – Brad Pitt

55. “Without pain and suffering, we would be nothing.” – Brad Pitt

57. “I’ve been in these tabloids for 14 years now, and at some point you just become a Zen master of it all.” – Brad Pitt

59. “No more excuses. I can’t blame anything on my parents. I’m responsible for my mistakes and my choices.” – Brad Pitt

63. “Each misstep leads to the next correct step.” – Brad Pitt

64. “For me a film is at its best when you can start filling in the story with your own life experience.” – Brad Pitt

65. “We’re consumers. We are by-products of a lifestyle obsession.” – Brad Pitt

Did you find these Brad Pitt Quotes inspiring?

Which Brad Pitt quote is your favourite? Let me know in the comments and please share this post to help and inspire others.

67 Steve Harvey Quotes To Be Successful

77 Famous Voltaire Quotes That Will Enlighten You

If you’re looking for the best collection of Voltaire quotes then look no further. François-Marie Arouet, known by his pen...