Arnold Schwarzenegger’s 6 Rules Of Success was originally taken from his now legendary speech he gave during the Governor’s 2009 USC Commencement Address.

There is no doubting the level of success Arnold Schwarzenegger has achieved in his life whether it be in bodybuilding, acting or politics.

Having grown up in a small village in Austria, what Arnold has achieved is simply inspiring.

Arnold Schwarzenegger’s 6 Rules For Success is profound wisdom that you can start incorporating into your life today.

Below is my take on his 6 Rules For Success. 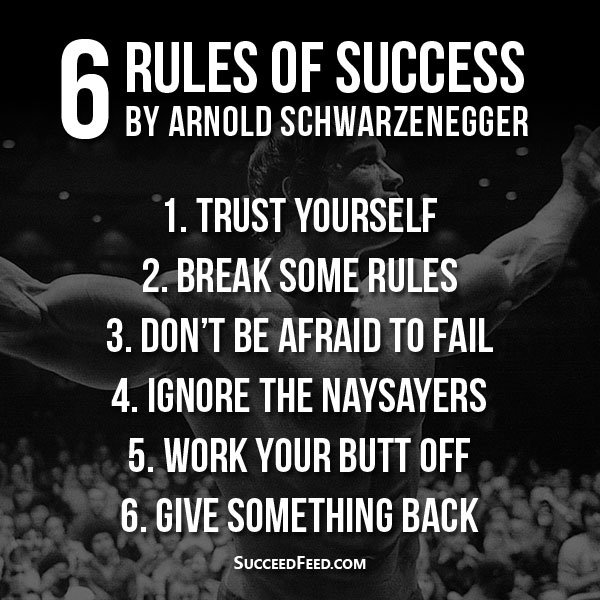 A lot of the time its easy to be influenced by others. A lot of us grow up trying to meet the expectations of our parents, teachers or friends but you need to decide who you truly want to be.

Arnold is quick to state “break the rules, not the law”, and by that he means do things differently. Think outside of the box and pave your own way.

He makes the point that you can’t be a maverick or a true original by being too well behaved and he has a point. If you try to go through live trying to be like everyone else, doing what they do and trying not to rock the boat you’ll probably find yourself fading into mediocrity.

The fear of failure is probably the number one roadblock to success for most people and its because we associate such negativity to failure.

We’re indoctrinated from a very early age from society, our parents and schools that failure is something to be ashamed of and so we do our best to avoid it.

In doing so it paralyses people. They don’t even take action unless success is guaranteed.

You must realise that if you want to succeed then you must be prepared to fail. That failure is apart of success.

Believe in your vision and just resolve to keep going until you achieve it. You may fail along the way but if you keep going you will eventually succeed.

The only true failure that exists is giving up or not even starting to begin with.

There will always be people who say it can’t be done but if you want to be successful you must ignore what they say and move ahead anyway.

Something is only impossible until its done and you can be the first to do it.

5. Work Your Butt Off

I’m glad Arnold included this in his 6 Rules Of Success.

There is just no escaping hard work. Trust me, I have tried to trick myself that I could work smart plenty of times but you still have to put in the time and effort to do anything worthwhile.

Decide what you want, decide whether the reward is worth the effort if it is then commit to putting in the work.

You get fulfilment when you do something for others.

Arnold Schwarzenegger says that reaching out and helping people will give you more satisfaction than anything else and isn’t he right? Haven’t you experienced that before?

Make it a habit to give something to others on a regular basis, whether that is your time, your money or just a helping hand.

Giving to others will help you realise just how much you have to be grateful for.

Do you agree with Arnold Schwarzenegger’s 6 Rules Of Success? Let me know in the comments below.

What To Do When Your Idea Has Already Been Done?

7 Questions To Ask Yourself Every Morning To Be Successful

70 Attack On Titan Quotes That Will Inspire Greatness

Looking for the best Attack On Titan quotes? Attack on Titan is one of the popular anime shows ever released....