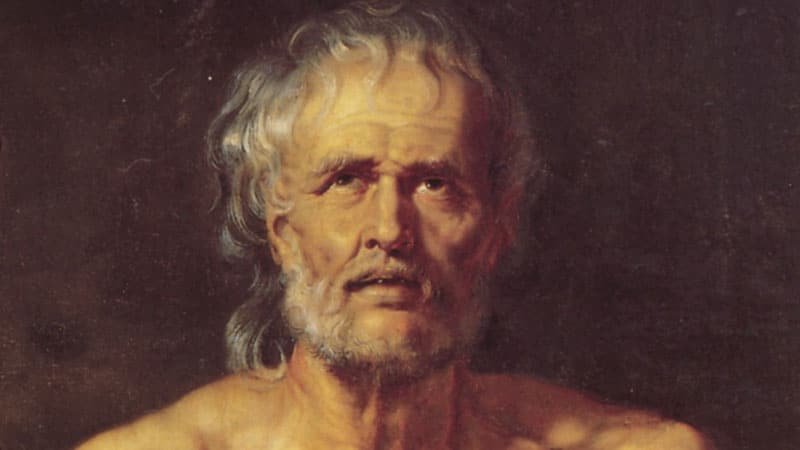 Lucius Annaeus Seneca, otherwise known as Seneca the Younger, or simply Seneca was born in southern Spain over 2,000 years ago and educated in Rome.

Seneca was probably the most enjoyable and readable of ancient philosophers and this was partly due to the fact that his most notable work came in the form of letters. Two of the most popular include On The Shortness Of Life and Letters From A Stoic. In fact I highly recommend you read them.

The Seneca quotes on life below are packed full of stoic wisdom that can inspire and guide you today.

1. “Difficulties strengthen the mind, as labor does the body.” – Seneca

2. “One of the most beautiful qualities of true friendship is to understand and to be understood.” – Seneca

3. “True happiness is… to enjoy the present, without anxious dependence upon the future.” – Seneca

5. “It is a rough road that leads to the heights of greatness.” – Seneca

6. “A gem cannot be polished without friction, nor a man perfected without trials.” – Seneca

7. “A gift consists not in what is done or given, but in the intention of the giver or doer.” – Seneca

8. “Life’s like a play: it’s not the length, but the excellence of the acting that matters.” – Seneca

9. “All cruelty springs from weakness.” – Seneca

10. “The bravest sight in the world is to see a great man struggling against adversity.” – Seneca

11. “The wish for healing has always been half of health.” – Seneca

15. “Wisdom allows nothing to be good that will not be so forever; no man to be happy but he that needs no other happiness than what he has within himself; no man to be great or powerful that is not master of himself.” – Seneca

16. “The first step in a person’s salvation is knowledge of their sin.” – Seneca

17. “We should give as we would receive, cheerfully, quickly, and without hesitation; for there is no grace in a benefit that sticks to the fingers.” – Seneca

21. “Anger, if not restrained, is frequently more hurtful to us than the injury that provokes it.” – Seneca

22. “We should every night call ourselves to an account: what infirmity have I mastered today? what passions opposed? what temptation resisted? what virtue acquired? Our vices will abate of themselves if they be brought every day to the shrift.” – Seneca

23. “We often want one thing and pray for another, not telling the truth even to the gods.” – Seneca

24. “No great genius has ever existed without some touch of madness.” – Seneca

25. “Everywhere is nowhere. When a person spends all his time in foreign travel, he ends by having many acquaintances, but no friends.” – Seneca

26. “A quarrel is quickly settled when deserted by one party; there is no battle unless there be two.” – Seneca

27. “Be wary of the man who urges an action in which he himself incurs no risk.” – Seneca

29. “Nothing is so wretched or foolish as to anticipate misfortunes. What madness is it to be expecting evil before it comes.” – Seneca

31. “Our plans miscarry because they have no aim. When a man does not know what harbor he is making for, no wind is the right wind.” – Seneca

32. “He who dreads hostility too much is unfit to rule.” – Seneca

34. “Wherever there is a human being, there is an opportunity for a kindness.” – Seneca

35. “Luck is a matter of preparation meeting opportunity.” – Seneca

36. “We are more often frightened than hurt; and we suffer more from imagination than from reality.” – Seneca

37. “The day which we fear as our last is but the birthday of eternity.” – Seneca

38. “It is quality rather than quantity that matters.” – Seneca

39. “Expecting is the greatest impediment to living. In anticipation of tomorrow, it loses today.” – Seneca

40. “The greatest remedy for anger is delay.” – Seneca

42. “It is more fitting for a man to laugh at life than to lament over it.” – Seneca

44. “Even after a bad harvest there must be sowing.” – Seneca

45. “Most powerful is he who has himself in his own power.” – Seneca

47. “Whenever the speech is corrupted so is the mind.” – Seneca

48. “For many men, the acquisition of wealth does not end their troubles, it only changes them.” – Seneca

49. “You must live for another if you wish to live for yourself.” – Seneca

50. “The pressure of adversity does not affect the mind of the brave man… It is more powerful than external circumstances.” – Seneca

53. “He that does good to another does good also to himself.” – Seneca

54. “No one is laughable who laughs at himself.” – Seneca

55. “We become wiser by adversity; prosperity destroys our appreciation of the right.” – Seneca

57. “He who does not prevent a crime when he can, encourages it.” – Seneca

59. “Whatever one of us blames in another, each one will find in his own heart.” – Seneca

60. “The mind that is anxious about the future is miserable.” – Seneca

61. “To keep oneself safe does not mean to bury oneself.” – Seneca

62. “We suffer more in imagination than in reality.” – Seneca

63. It does not matter what you bear, but how you bear it. – Seneca

65. “The man who has anticipated the coming of troubles takes away their power when they arrive.” – Seneca

66. “We should not, like sheep, follow the herd of creatures in front of us, making our way where others go, not where we ought to go.” – Seneca

67. “He who indulges in empty fears earns himself real fears.” – Seneca

68. “It is not that we are given a short life but we make it short, and we are not ill-supplied but wasteful of it.” – Seneca

69. “Two elements must therefore be rooted out once for all, – the fear of future suffering, and the recollection of past suffering; since the latter no longer concerns me, and the former concerns me not yet.” – Seneca

70. “Begin at once to live, and count each separate day as a separate life.” – Seneca

72. “Man is affected not by events but by the view he takes of them.” – Seneca

76. “The greatest wealth is a poverty of desires.” – Seneca

78. “Drunkenness is nothing but voluntary madness.” – Seneca

80. “Remember that pain has this most excellent quality. If prolonged it cannot be severe, and if severe it cannot be prolonged.” – Seneca

81. “The greatest loss of time is delay and expectation, which depend upon the future. We let go the present, which we have in our power, and look forward to that which depends upon chance, and so relinquish a certainty for an uncertainty.” – Seneca

82. “What should a wise person do when given a blow? Same as Cato when he was attacked; not fire up or revenge the insult, or even return the blow, but simply ignore it.” – Seneca

84. “There is nothing more despicable than an old man who has no other proof than his age to offer of his having lived long in the world.” – Seneca

85. “Anger: an acid that can do more harm to the vessel in which it is stored than to anything on which it is poured.” – Seneca

86. “The mind is a matter over every kind of fortune; itself acts in both ways, being the cause of its own happiness and misery.” – Seneca

87. “No one can be despised by another until he has learned to despise himself.” – Seneca

88. “To wish to progress is the largest part of progress.” – Seneca

Did you find these Seneca Quotes inspiring?

47 John Assaraf Quotes That Will Make You Successful

67 Arnold Schwarzenegger Quotes To Be Successful