Jack Dorsey is one of the college dropouts that went on to become a billionaire, dropping out of New York University just one semester short of graduation. His net worth is an estimated $4.8 billion according to Forbes.

But its important to realise that Dorsey went on to become successful with Twitter because he had been working on ideas that would ultimately contribute to it since the age of 14. In his own words “Success is never accidental.”

Below are 35 of the most inspirational Jack Dorsey quotes for entrepreneurs.

2. “Make every detail perfect, and limit the number of details to perfect.” – Jack Dorsey

3. “It’s empowering to be asked to look at what’s possible, not told how to do it.” – Jack Dorsey

4. “Everyone has an idea. But it’s really about executing the idea and attracting other people to help you work on the idea.” – Jack Dorsey

6. “An idea that can change the course of the company can come from anywhere.” – Jack Dorsey

7. “You are not here to do what has already been done.” – Jack Dorsey

8. “The greatest lesson that I learned in all of this is that you have to start. Start now, start here, start small and keep it simple.” – Jack Dorsey

10. “The strongest thing you can cultivate as an entrepreneur is to not rely on luck but cultivating an ability to recognize fortunate situations when they are occurring.” – Jack Dorsey

11. “You can worry about the competition or you can focus on what’s ahead of you and drive fast.” – Jack Dorsey

15. “The idea of Twitter started with me working in dispatch since I was 15 years old, where taxi cabs or firetrucks would broadcast where they were and what they were doing.” – Jack Dorsey

17. “I’ve always been fascinated by cities and how they work. And I taught myself how to program so I can understand how the city works.” – Jack Dorsey 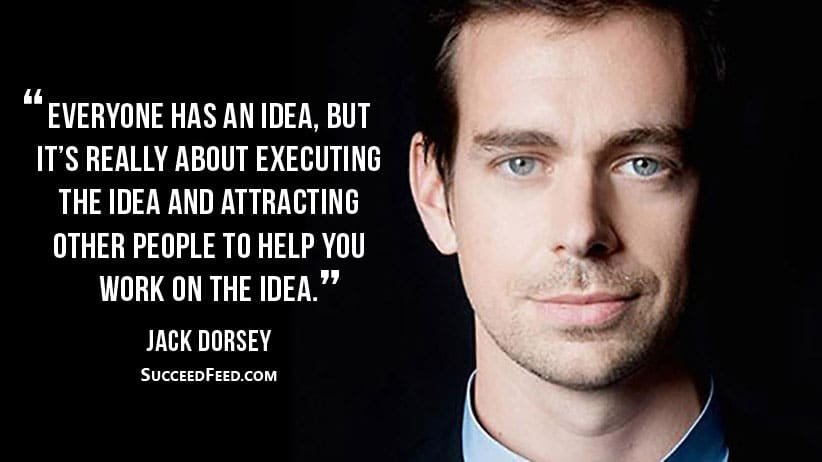 21. “All my days are themed. Monday is management…Tuesday is product, engineering, and design. Wednesday is marketing, growth, and communications. Thursday is partnership and developers. Friday is company and culture…Sundays are for strategy…Saturday is a day off.” – Jack Dorsey

22. “Everything we do is about getting people to be more open, more creative, more courageous.” – Jack Dorsey

23. “You don’t have to start from scratch to have a massive impact on the world.” – Jack Dorsey

25. “When you simplify…When you get down to the essence, you fix so many things.” – Jack Dorsey

26. “For any Silicon Valley company, the most important thing is the company. And any great founders need to get out of the way of the company. We presented a spark with an idea.” – Jack Dorsey

28. “I love making something complex. I love taking everything away, taking all the debris, the conceptual debris from a technology away so that you can just focus on what’s most important.” – Jack Dorsey

29. “The more we share what’s happening around us, the more we understand how someone lives their life. The greater the understanding we have, the more empathy we have for each other. By and large, that reduces conflicts.” – Jack Dorsey

30. “If the merit of the idea is strong, it spreads really quickly no matter who you are or where you are from.” – Jack Dorsey

31. “Our job as founders, as entrepreneurs is to distribute the future that’s already here.” – Jack Dorsey

Did you find these Jack Dorsey Quotes inspiring?