What’s your motivation strategy? How do you habitually motivate yourself?

If you’re not getting anywhere in life or an area of your life is not working it could be that you’re habitually using a motivation strategy that just doesn’t last.

You see at the most basic level your behaviour is determined by your desire to gain pleasure and your need to avoid pain. Typically it’s a unique combination of the two that motivates each individual.

The trouble is though when the need to avoid pain or the strategy of “moving away” from pain becomes the dominant and habitual motivation strategy it can cause you to experience the very pain that you’re doing your up most to avoid.

“Moving Away” From Pain Motivation

Pain and fear can be very powerful motivators and there are times in your life where they are useful, though using it as your primary source of motivation in the long term is not such a good idea.

Often you may hear people say stuff like “I’m sick of being broke” or “I’m going to prove them all wrong” or “I’m not ending up like my drug addicted uncle”…something like that.

Those are all examples of someone who is going is motivated by pain.

Again it’s not a bad thing to get you going in the short term but you need to make sure you have something to move towards that motivates you just as much at a deep subconscious level.

An “away from” example

As an example to illustrate what happens when using the “away from” strategy let’s consider the person that finds themselves broke month after month.

First the person is broke, they’re in pain and so they get motivated to make money.

They take action, they make money and they are now far away from the initial pain that motivated them. They’re no longer broke.

Consciously they would like to make more money because they have all these other big goals and dreams but they just can’t seem to continue taking action like they did before when they were desperate to get out of being broke.

Over time they find themselves back to being broke to refuel their motivation and repeat the cycle again.

Now that’s a very simplistic example and it’s not always that straight forward but it does illustrate that the “away from” motivation strategy doesn’t provide you with consistent, lasting motivation.

The Problem With Using Pain As Motivation

The biggest problem with using an “away from” motivation strategy is that the motivation doesn’t last.

But it’s not meant to last. We’re not meant to be driven by fear and pain long term but a lot of people are and it could be the very thing that is ruining their lives and causing them unnecessary chronic stress – that’s the danger.

Think about it, no one puts themselves in painful situations by conscious choice but they often find themselves in situations they don’t like. You can hear it in their language when they say “I have to…”

Watch your language and be clear whether you “want to” or “have to”.

You Get What You Focus On

That is not a very good way to design a life because you’re not really focused on moving toward something specific. There is no real plan there and most people will just take enough action to get out of a painful situation and then stop. They pretty much do the bare minimum until they’re out of pain.

I know firsthand how frustrating it can be to use the “away from” strategy long term because for quite a while my motivation to create an income was based around “I have to pay the bills” and even though I had all these other big goals and ambitions as long as I paid the bills I felt relieved because I was moving away all the bad stuff that would happen if I didn’t pay the bills. That’s where my focus was.

Problem is I would then lose my motivation to do anything else. I mean consciously I wanted to but subconsciously the dialogue in my mind was probably along the lines of “relax, take a break, the bills are paid for the month”.

Away From Motivation Is Halting Your Progress

Below are two graphs, one demonstrating the progress trend made in an away from strategy and the other showing the moving toward motivation strategy.

The grey area is where most people live their lives. They’re accustomed to making progress and achieving success in that range. The dashed line represents the trend of where their success is headed and the orange line shows the persons progress over time.

Moving Away From Trend 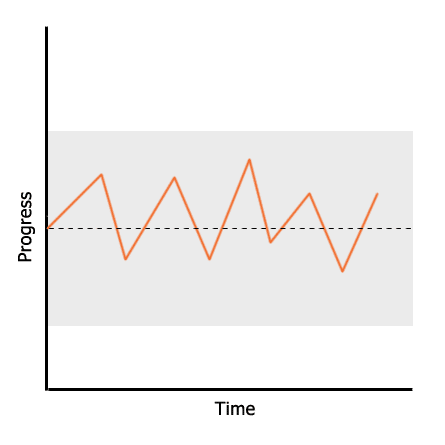 You can see from the graph that the person who predominantly uses an “away from” strategy is not really getting anywhere over time. They make some progress and then make no progress and go into decline and this cycle repeats. Overall they usually stay where they are. 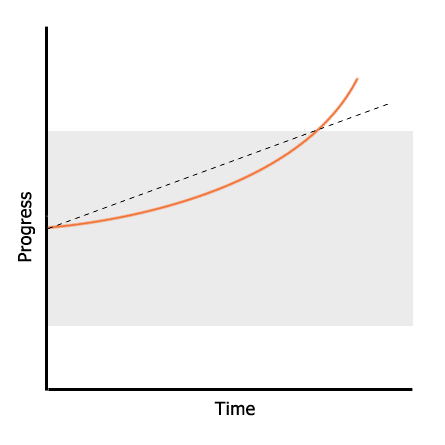 The “moving toward” trend is different. This person will make continuous progress over time and trend their life upward always breaking out of their grey zone. They are able to make consistent progress because their motivation is lasting.

Ideally you want to primarily be motivated by moving toward your goals as opposed to moving away from the things you don’t want.

The 3 main reasons being is that:

The best way to start operating from a “moving toward” motivation strategy is to create a compelling future, something that pulls you toward it, something that you can be excited about and focus on daily.

Now obviously things aren’t always as simplistic as either this or that. There are always exceptions to the rule. There are a lot of people of have become tremendously successful primarily using an “away from” motivation strategy. But I don’t think they’ve maintained their success by still focusing on the pain. People change, their environments change, their thinking changes so anything is possible when you start making progress.