Anita Roddick was a British businesswoman best known as the founder of The Body Shop.

She initially started The Body Shop back in 1976 with the goal of providing an income for herself and her two daughters whilst her husband was travelling South America.

By 2004, the Body Shop had 1980 stores, serving over 77 million customers throughout the world. It was voted the second most trusted brand in the United Kingdom, and 28th top brand in the world.

Being a human rights activist and environmental campaigner, Anita Roddick had a unique way of thinking about business but attributed a lot to her success.

Though passing away in 2007, she had definitely made an impact on those causes close to her heart through business.

Below I’ve compiled some of the best Anita Roddick quotes for entrepreneurs.

1. “If you think you’re too small to have an impact, try going to bed with a mosquito.” – Anita Roddick

2. “The end result of kindness is that it draws people to you.” – Anita Roddick

3. “There is no scientific answer for success. You can’t define it. You’ve simply got to live it and do it.” – Anita Roddick

4. “I believe in businesses where you engage in creative thinking, and where you form some of your deepest relationships. If it isn’t about the production of the human spirit, we are in big trouble.” – Anita Roddick

5. “If you do things well, do them better. Be daring, be first, be different, be just.” – Anita Roddick

6. “If I can’t do something for the public good, what the hell am I doing?” – Anita Roddick

7. “To succeed you have to believe in something with such a passion that it becomes a reality.” – Anita Roddick

8. “You have to look at leadership through the eyes of the followers and you have to live the message. What I have learned is that people become motivated when you guide them to the source of their own power and when you make heroes out of employees who personify what you want to see in the organization.” – Anita Roddick

9. “Be courageous. It’s one of the only places left uncrowded.” – Anita Roddick

10th Anita Roddick Quote: “Whatever you do, be different – that was the advice my mother gave me, and I can’t think of better advice for an entrepreneur. If you’re different, you will stand out.” – Anita Roddick

11. “We entrepreneurs are loners, vagabonds, troublemakers. Success is simply a matter of finding and surrounding ourselves with those open-minded and clever souls who can take our insanity and put it to good use.” – Anita Roddick

12. “It is true that there is a fine line between entrepreneurship and insanity. Crazy people see and feel things that others don’t. But you have to believe that everything is possible. If you believe it, those around you will believe it too.” – Anita Roddick

14. “My passionate belief is that business can be fun, it can be conducted with love and a powerful force for good.” – Anita Roddick

15. “I have always found that my view of success has been iconoclastic: success to me is not about money or status or fame, its about finding a livelihood that brings me joy and self-sufficiency and a sense of contributing to the world.” – Anita Roddick 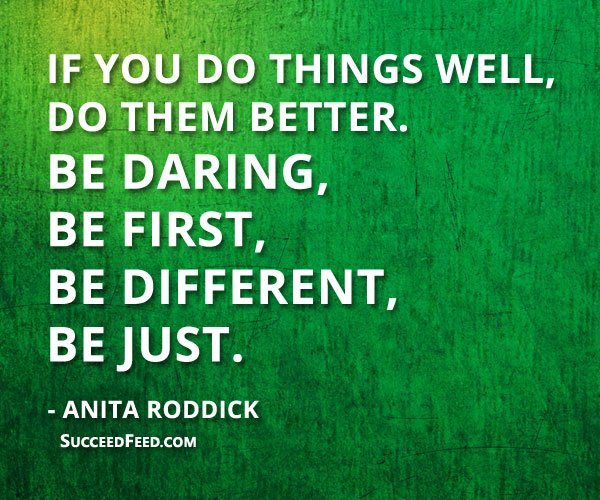 16. “We communicate with passion and passion persuades.” – Anita Roddick

17. “Be special. Be anything but mediocre.” – Anita Roddick

18. “The function of wealth is not to accumulate it but to give it away as productively and responsibly as you can.” – Anita Roddick

21. “Get informed. Get outraged. Get inspired. Get active.” – Anita Roddick

23. “Travel is like a university without walls.” – Anita Roddick

25. “I am aware that success is more than a good idea. It is timing too.” – Anita Roddick

26. “A vision is something you see and others don’t. Some people would say that’s a pocket definition of lunacy. But it also defines entrepreneurial spirit.” – Anita Roddick

27. “I think the leadership of a company should encourage the next generation not just to follow, but to overtake. The duty of leadership is to put forward ideas, symbols, metaphors of the way it should be done, so that the next generation can work out new and better ways of doing the job. The complaint Gordon and I have is that we are not being overtaken by our staff. We would like to be able to say, “We can’t keep up with you guys”, but, it is not happening.” – Anita Roddick

28. “Running a company on market research is like driving while looking in the rear-view mirror.” – Anita Roddick

29. “Three components make an entrepreneur: the person, the idea and the resources to make it happen.” – Anita Roddick

30th Anita Roddick Quote: “You’ve got to be hungry – for ideas, to make things happen and to see your vision made into reality.” – Anita Roddick 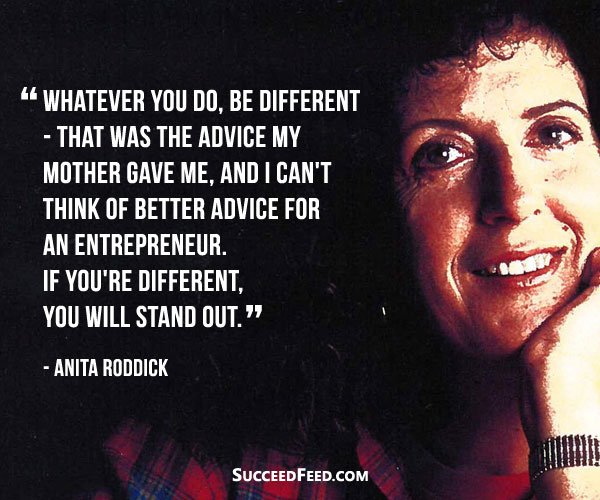 31. “It’s frustrating sometimes to see the mismatch in resources between the pointless and the urgent, isn’t it. Like the gap between the vast resources poured into military technological research to make war more sophisticated, and the trickle that goes into developing techniques that might prevent war instead.” – Anita Roddick

32. “Mess with nature and it will mess right back…” – Anita Roddick

33. “When you take the high moral road it is difficult for anyone to object without sounding like a complete fool.” – Anita Roddick

34. “There are only two ways of making money: the hard way and the very hard way!” – Anita Roddick

35. “I wake up every morning thinking…this is my last day. And I jam everything into it. There’s no time for mediocrity. This is no damned dress rehearsal.” – Anita Roddick

36. “The growth of The Body Shop is testimony to the fact that you don’t need to waste money on costly advertising campaigns to be successful. Instead, we’ve always relied on word of mouth and stories.” – Anita Roddick

37. “When your back is against the wall financially, creative juices flow.” – Anita Roddick

38. “It’s about creating a product or service so good that people will pay for it. Now 30 years on The Body Shop is a multi local business with over 2045 stores serving over 77 million customers in 51 different markets in 25 different languages and across 12 time zones. And I haven’t a clue how we got here!” – Anita Roddick

39. “The bigger you grow, the more intimate communication has to be. It almost has to be belly and belly. As you get bigger and bigger in an organization, everything gets more and more detached and everything is on email or voicemail. That’s the worse thing because lack of intimacy is one of the downsides (of growth).” – Anita Roddick

40th Anita Roddick Quote: “You persuade people with passion, so you’ve got to have a product or service you feel emotionally charged about. Then you can tell stories about it that will inspire others.” – Anita Roddick

41. “My goal was livelihood. We don’t use that word often enough. If I could give one piece of advice to anyone it’s don’t obsess with this notion that you have to turn everything you do into a business, because that ends up being a small version of a large company. But if you can create an honorable livelihood, where you take your skills and use them and you earn a living from it, it gives you a sense of freedom and allows you to balance your life the way you want.” – Anita Roddick

42. “My argument is: keep the bloody bottom line at the bottom. That’s where it should be.” – Anita Roddick

43. “You can’t change the world from the rear view mirror.” – Anita Roddick

44. “I started The Body Shop in 1976 simply to create a livelihood for myself and my two daughters, while my husband, Gordon, was trekking across the Americas. I had no training or experience and my only business acumen was Gordon’s advice to take sales of £300 a week. Nobody talks of entrepreneurship as survival, but that’s exactly what it is and what nurtures creative thinking.” – Anita Roddick 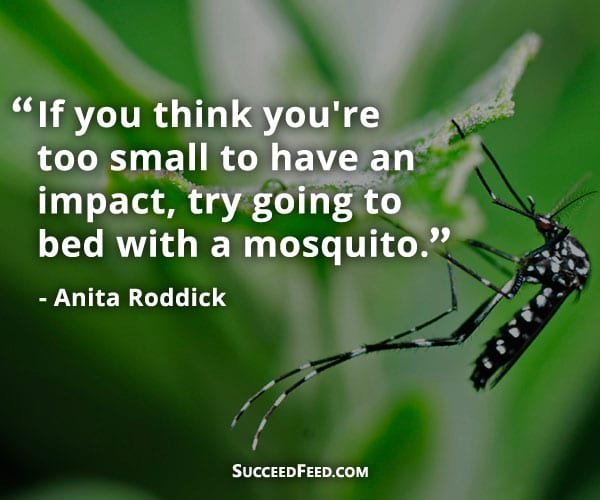 46. “It is a critical job of any entrepreneur to maximize creativity, and to build the kind of atmosphere around you that encourages people to have ideas. That means open structures, so that accepted thinking can be challenged.” – Anita Roddick

47. “Never be seduced into believing it isn’t the role of business to tackle the big issues, because it absolutely is.” – Anita Roddick

48. “I think it is completely immoral for a shop to trade in the middle of a community, to take money and make profits from that community and then ignore the existence of that community, its needs and problems.” – Anita Roddick

49. “A great advantage I had when I started The Body Shop was that I had never been to business school.” – Anita Roddick

51. “Don’t underestimate the power of the vigilante consumer.” – Anita Roddick

52. “Entrepreneurs are all a little crazy. There is a fine line between an entrepreneur and a crazy person. Crazy people see and feel things that others don’t. An entrepreneur’s dream is often a kind of madness, and it is almost as isolating. What differentiates the entrepreneur from the crazy person is that the former gets other people to believe in his vision.” – Anita Roddick

53. “I don’t think I’m a risk-taker. I don’t think any entrepreneur is. I think that’s one of those myths of commerce. The new entrepreneur is more values-led: you do what looks risky to other people because that’s what your convictions tell you to do. Other companies would say I’m taking risks, but that’s my path – it doesn’t feel like risk to me.” – Anita Roddick

54. “If companies are in business solely to make money, no consumer can fully trust what they do or say.” – Anita Roddick

55. “You’ve got so many groups that have no voice in this world – the indigenous, the poor. So how can I use the resources that I have and bring them up, highlight them. And it’s not that difficult. It’s just choosing and concentrating and focusing.” – Anita Roddick

Which of these Anita Roddick quotes is your favourite? Let me know in the comments below.