Looking for the best Jeff Bezos quotes? Then look no further.

I’ve compiled 60 of the best quotes about business from the founder of Amazon.com.

Starting back in 1994, Jeff Bezos launched Amazon.com, originally selling books but then expanding literally from everything A to Z.

Not only has Jeff Bezos been successful in making Amazon the worlds biggest online retailer, but in creating the platform that Amazon is today he has helped thousands of other entrepreneurs to successfully create their own businesses.

The following quotes about business from Jeff Bezos show exactly why Amazon has been so successful and there are plenty of inspiring business lessons one can learn by reading through them.

1. “I think frugality drives innovation, just like other constraints do. One of the only ways to get out of a tight box is to invent your way out.” – Jeff Bezos

3. “What we need to do is always lean into the future; when the world changes around you and when it changes against you – what used to be a tail wind is now a head wind – you have to lean into that and figure out what to do because complaining isn’t a strategy.” – Jeff Bezos

4. “We’ve had three big ideas at Amazon that we’ve stuck with for 18 years, and they’re the reason we’re successful: Put the customer first. Invent. And be patient.” – Jeff Bezos

5. “We see our customers as invited guests to a party, and we are the hosts. It’s our job every day to make every important aspect of the customer experience a little bit better.” – Jeff Bezos

6. “The common question that gets asked in business is, ‘why?’ That’s a good question, but an equally valid question is, ‘why not?'” – Jeff Bezos

9. “If you’re competitor-focused, you have to wait until there is a competitor doing something. Being customer-focused allows you to be more pioneering.” – Jeff Bezos

10th Jeff Bezos Quote: “If you do build a great experience, customers tell each other about that. Word of mouth is very powerful.” – Jeff Bezos

12. “The one thing that offends me the most is when I walk by a bank and see ads trying to convince people to take out second mortgages on their home so they can go on vacation. That’s approaching evil.” – Jeff Bezos

13. “A brand for a company is like a reputation for a person. You earn reputation by trying to do hard things well.” – Jeff Bezos 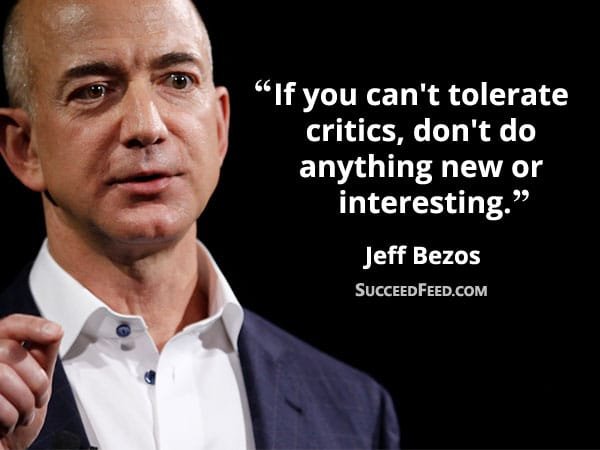 16. “I believe you have to be willing to be misunderstood if you’re going to innovate.” – Jeff Bezos

17. “The thing that motivates me is a very common form of motivation. And that is, with other folks counting on me, it’s so easy to be motivated.” – Jeff Bezos

19. “There are two ways to extend a business. Take inventory of what you’re good at and extend out from your skills. Or determine what your customers need and work backward, even if it requires learning new skills. Kindle is an example of working backward.” – Jeff Bezos

22. “A company shouldn’t get addicted to being shiny, because shiny doesn’t last.” – Jeff Bezos

23. “My own view is that every company requires a long-term view.” – Jeff Bezos

24. “Part of company culture is path-dependent – it’s the lessons you learn along the way.” – Jeff Bezos

25. “We expect all our businesses to have a positive impact on our top and bottom lines. Profitability is very important to us or we wouldn’t be in this business.” – Jeff Bezos

26. “You want your customers to value your service.” – Jeff Bezos

28. “I strongly believe that missionaries make better products. They care more. For a missionary, it’s not just about the business. There has to be a business, and the business has to make sense, but that’s not why you do it. You do it because you have something meaningful that motivates you.” – Jeff Bezos

29. “Percentage margins don’t matter. What matters always is dollar margins: the actual dollar amount. Companies are valued not on their percentage margins, but on how many dollars they actually make, and a multiple of that.” – Jeff Bezos

30th Jeff Bezos Quote: “We are stubborn on vision. We are flexible on details…” – Jeff Bezos 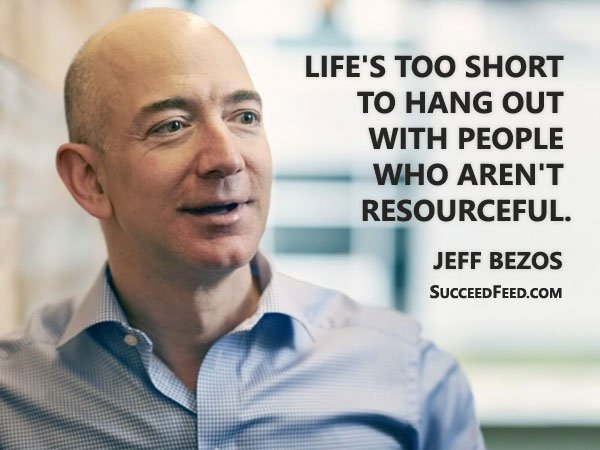 31. “If you only do things where you know the answer in advance, your company goes away.” – Jeff Bezos

32. “If your customer base is aging with you, then eventually you are going to become obsolete or irrelevant. You need to be constantly figuring out who are your new customers and what are you doing to stay forever young.” – Jeff Bezos

33. “On the Internet, companies are scale businesses, characterized by high fixed costs and relatively low variable costs. You can be two sizes: You can be big, or you can be small. It’s very hard to be medium. A lot of medium-sized companies had the financing rug pulled out from under them before they could get big.” – Jeff Bezos

34. “If you don’t understand the details of your business you are going to fail.” – Jeff Bezos

35. “If you can’t tolerate critics, don’t do anything new or interesting.” – Jeff Bezos

36. “Great industries are never made from single companies. There is room in space for a lot of winners.” – Jeff Bezos

38. “The balance of power is shifting toward consumers and away from companies… The right way to respond to this if you are a company is to put the vast majority of your energy, attention and dollars into building a great product or service and put a smaller amount into shouting about it, marketing it.” – Jeff Bezos

39. “If you double the number of experiments you do per year you’re going to double your inventiveness.” – Jeff Bezos

41. “If you never want to be criticized, for goodness’ sake don’t do anything new.” – Jeff Bezos

42. “If you’re not stubborn, you’ll give up on experiments too soon. And if you’re not flexible, you’ll pound your head against the wall and you won’t see a different solution to a problem you’re trying to solve.” – Jeff Bezos

44. “It is very difficult to get people to focus on the most important things when you’re in boom times.” – Jeff Bezos

46. “Maintain a firm grasp of the obvious at all times.” – Jeff Bezos

47. “We innovate by starting with the customer and working backwards. That becomes the touchstone for how we invent.” – Jeff Bezos

48. “Any business plan won’t survive its first encounter with reality. The reality will always be different. It will never be the plan.” – Jeff Bezos

49. “The framework I found, which made the decision (to start Amazon in 1994) incredibly easy, was what I called a regret minimization framework. I wanted to project myself forward to age 80 and say, ‘OK, I’m looking back on my life. I want to minimize the number of regrets I have.’ And I knew that when I was 80, I was not going to regret having tried this. I was not going to regret trying to participate in this thing called the Internet that I thought was going to be a really big deal. I knew that if I failed, I wouldn’t regret that. But I knew the one thing I might regret is not ever having tried. I knew that that would haunt me every day.” – Jeff Bezos

53. “Invention requires a long-term willingness to be misunderstood. You do something that you genuinely believe in, that you have conviction about, but for a long period of time, well-meaning people may criticize that effort. When you receive criticism from well-meaning people, it pays to ask, ‘Are they right?’ And if they are, you need to adapt what they’re doing. If they’re not right, if you really have conviction that they’re not right, you need to have that long-term willingness to be misunderstood. It’s a key part of invention.” – Jeff Bezos

55. “The most important single thing is to focus obsessively on the customer. Our goal is to be earth’s most customer-centric company.” – Jeff Bezos

56. “Our point of view is we will sell more if we help people make purchasing decisions.” – Jeff Bezos

57. “Another thing that I would recommend to people is that they always take a long-term point of view. I think this is something about which there’s a lot of controversy. A lot of people — and I’m just not one of them — believe that you should live for the now. I think what you do is think about the great expanse of time ahead of you and try to make sure that you’re planning for that in a way that’s going to leave you ultimately satisfied. This is the way it works for me. There are a lot of paths to satisfaction and you need to find one that works for you.” – Jeff Bezos

58. “You need a culture that high-fives small and innovative ideas and senior executives (that) encourage ideas. In order for innovative ideas to bear fruit, companies need to be willing to “wait for 5-7 years, and most companies don’t take that time horizon.” – Jeff Bezos

59. “I want to see good financial returns, but also to me there’s the extra psychic return of having my creativity and technological vision bear fruit and change the world in a positive way.” – Jeff Bezos

60. “You know if you make a customer unhappy, they won’t tell five friends, they’ll tell 5,000 friends. So we are at a point now where we have all of the things we need to build an important and lasting company, and if we don’t, it will be shame on us.” – Jeff Bezos

60 Sara Blakely Quotes That Will Empower You

70 Attack On Titan Quotes That Will Inspire Greatness

Looking for the best Attack On Titan quotes? Attack on Titan is one of the popular anime shows ever released....