Now before you begin to read the success story of Alex Tew I must tell that it took place in 2005 whilst he was a 21 year old student living in Wiltshire, UK.

Back then the Million Dollar Homepage was a phenomenon and I remember thinking at the time just how brilliant and simple the idea was and I wanted to write about it now, over a decade later because when I think about it, even today, it’s still such an inspiring success story and I hope you can gain something from it.

Alex Tew’s idea was to try and make $1m by selling 1 million pixels for $1 each. Sold in groups of 100, each pixel could link to another webpage, and so they were used as advertisements by the companies that bought them.

Initially he sold the first pixels to family friends but then the press got wind of what a 21 year old student was doing and sales quickly ramped up.

As word spread, and more and more users visited the page to see what the fuss was about, the value of an ad there rose, until, 138 days after it launched, the final pixel was sold. 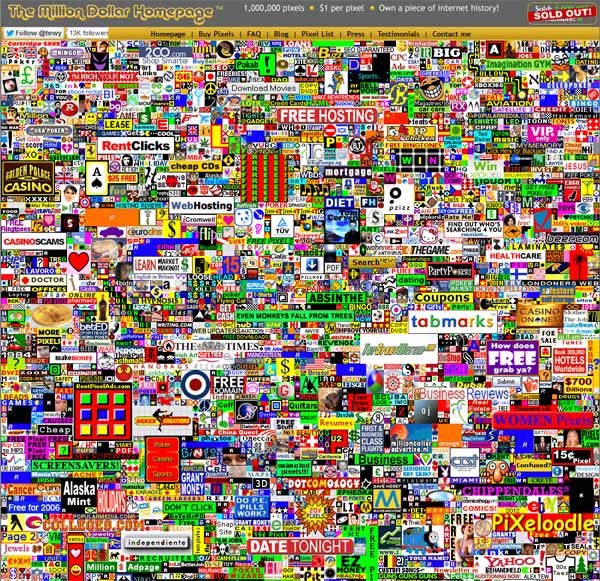 Alex Tew’s initial reason for starting the website was just to cover his University tuition fees for a 3 year Business Management degree.

“My site was launched due to the fact I needed money for university, and that’s exactly what my aim was,” he writes in his blog. “I thought, if I aim high – $1m – and only get a small percentage of that figure, that would still help me out a great deal.”

Alex Tew’s initial investment was £50 to buy web space and a domain name. He divided the blank homepage into 10,000 squares of 100 pixels each. Each pixel was worth $1, minimum purchase: $100.

The website managed to build a brand name through word of mouth, chain emails (remember those?) and some small media coverage and within a month Alex Tew had earned $37,000 – enough pixels to cover his university costs according to him.

He began his studies but as the website kept growing he chose to defer university for a year to focus on business. He was now attracting advertisers like The Times Newspaper and Yahoo to name a few.

He decided to invest $40,000 to upgrade his web server and employed a US based press officer. Both turned out to be smart moves as 50 percent of the advertisement came from the US alone.

There were copycats at the time but in Tew’s own words “The idea only works once and relies on novelty.”

A rather simple imitation, the Ten Thousand Dollar Homepage was started with the purpose of buying $10k Apple Watch.

And a more creative approach, the Million Dollar Map follows the same business model with varying degrees of success.

Today Alex Tew lives in San Francisco and is the founder of Calm.com, an app which helps people relax.

What really impressed me about Alex Tew’s Million Dollar Homepage business, and still  impresses me, was the simplicity of the business model but also the audacity he had to believe it would work.

He shot for the moon hoping to land among the stars and he more than reached his goal.

At the age of 21 he made $1,000,000 within the space of a few months using the same resources available to anyone with a domain name and hosting.

It’s a prime example of creating something from nothing and demonstrates just how quickly things can happen if you take action on an idea.

That was back in 2005…Today we all find ourselves fortunate to be living in a world surrounded by opportunity if we’re willing to take it. So the question is: will you?

Related Topics:Alex Tewmillionairesuccess story
Up Next